Exercise Reduces Risk of Back Pain in Pregnancy 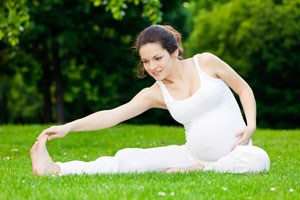 Pregnant women who exercise are less likely to suffer from back pain compared to those who don’t, according to new research. A study Norway found that pregnant women who engaged in physical activity at least three times a week were less likely to report pelvic girdle pain, lower back pain, and depression. These results could indicate an association between exercising while pregnant and lower prevalence of these common health problems in pregnancy.

Exercise therapy is often recommended as a treatment option for pelvic pain, back pain, and other aches associated with pregnancy. However, little is known about how likely pregnant women are to follow the exercise therapy routine recommended by their doctor.

To understand the influence of exercise habits on pregnant women, researchers conducted a study on the exercise routines of 3482 pregnant participants. Data were collected by a questionnaire in pregnancy weeks 17-21, during week 32, and through an electronic journal kept after the birth.

Just 14.5% of respondents said that they followed the recommended exercise level (at least 3 times per week, exercising for 20 minutes at moderate intensity). A third of the participants reported exercising less than once a week mid-pregnancy. The authors concluded that few Norwegian women follow exercise guidelines in mid-pregnancy.

Women may be more motivated to stay active if they knew the benefits of physical activity for preventing muscoskeletal disorders in pregnancy.  Previous studies have shown both exercise and chiropractic care to be effective natural approaches to pelvic and low-back pain during pregnancy. Many chiropractors provide their pregnant patients with exercise recommendations, utilizing both natural therapies to receive maximum benefit.

Send us a message.